TOPEKA, Kan. (AP) — A Kansas jury announced Thursday it could not reach a verdict in the trial of a woman accused of killing her ex-husband and girlfriend 20 years ago.

Jurors deliberated for about 35 hours over six days during Dana Chandler’s trial. Chandler, now 62, was charged with two counts of first-degree murder in the July 2002 shooting deaths of Mike Sisco, 47, and Karen Harkness, 53, in Topeka.

In this image from video, Dana Chandler awaits the jury’s verdict during her retrial in Shawnee County District Court in Topeka, Kansas on Thursday, Sept. 1, 2022. A Kansas jury announced Thursday that they will not could not reach a verdict in the trial of Dana Chandler accused of killing her ex-husband and girlfriend 20 years ago. (History Syndicate via AP, Pool)

Thursday’s debates lasted only a few moments. A status hearing to determine the next step in the long-running case has been set for September 29.

Chandler’s daughter Hailey Sisco, who testified she believed her mother killed her father, cried as she was hugged by prosecutor Charles Kitt.

Defense attorney Tom Bath hugged Chandler, who will remain in custody at least until the status hearing.

Juror Ben Alford told the Capital-Journal the final vote was 7-5 to convict Chandler. He said the votes taken throughout the lengthy deliberations were always close.

Prosecutors alleged that Chandler killed the couple because she was jealous of their relationship after her acrimonious divorce from Sisco. Chandler has always maintained her innocence, saying she was in Colorado when the victims were killed.

During closing arguments on August 25, prosecutor Kitt acknowledged that there was little physical evidence linking Chandler to the crime. But he said obsessive behavior towards Sisco combined with circumstantial evidence should convince jurors that she killed the pair.

Bath argued that law enforcement missed the opportunity to investigate other suspects because they were solely focused on her. He pointed to the limited physical evidence found at the scene and questioned how it was handled by investigators and medical examiners.

“How many cases have we seen where the evidence has not been tracked, not collected or not tested?” Bath asked the jury.

He continued: “We see time and time again, the police have ignored the evidence. They didn’t follow the evidence – they followed their bias.

Prosecutors stunned court watchers last week before closing arguments when they called a woman, Terri Anderson, who said she saw Chandler leave the Harkness home the night the couple were killed – the first time in the two-decade-old case that someone had placed Chandler on the scene.

On Thursday, defense attorneys called witnesses who undermined Anderson’s story. Topeka Police Detective. Lance Green said Anderson’s testimony that Chandler was at the scene shortly before midnight on July 6, 2002, contradicts other testimony that Sisco and Harkness were at a casino until at least 1:30 a.m. on July 7 .

Chandler was initially charged with the murders after a decade of investigation, and in 2012 was found guilty of two counts of murder. She was sentenced to two consecutive life sentences without the possibility of parole for 50 years. 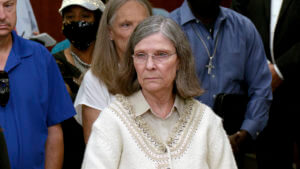 In this image from video, Dana Chandler awaits the jury’s verdict during her retrial in Shawnee County District Court in Topeka, Kansas on Thursday, Sept. 1, 2022. A Kansas jury announced Thursday that they will not could not reach a verdict in the trial of Dana Chandler accused of killing her ex-husband and girlfriend 20 years ago. (History Syndicate via AP, Pool)

The second trial was delayed as Chandler and his attorneys filed numerous motions to exclude evidence, change venues, and dismiss the case. The trial began on August 5.

According to court records, investigators said nothing was taken from the victims’ homes. The weapon was never found and no fingerprints were found on the spent casings at the scene. Hair later taken from Chandler did not match hair and fiber samples at the scene, and no evidence of the crime was found in his car.

However, some family members suspected Chandler, who they said was upset and angry after Sisco divorced her in 1997 and won full custody of their children.

Chandler was living in Denver, Colorado when the couple died. She told investigators she was driving and hiking in Colorado when the murders took place, but stories about her specific routes were inconsistent, with gaps in her credit card receipts and the use of her cell phone, according to court records.

Prosecutors alleged that Chandler drove from Denver to Topeka, killed the couple, and returned home.

The investigation went cold until 2009. After CBS’ “48 Hours” aired an episode about the unsolved murders, Shawnee County District Attorney Chad Taylor appointed a team to investigate the cold cases, including Chandler’s.

Chandler, who had moved to Duncan, Oklahoma, to live with her sister, was arrested in 2011 and charged with two counts of first degree premeditated murder.