A white nationalist group called the Hoosier Nationalists released a flyer saying they planned to march in Jeffersonville on Saturday.

An Indiana branch of a white nationalist hate group is planning a White Lives Matter march this Saturday in downtown Jeffersonville, Indiana. 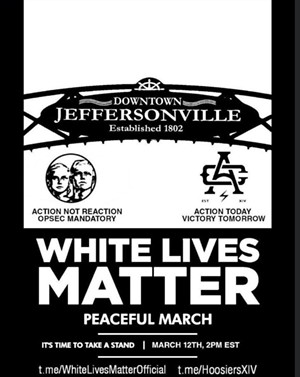 Hoosier Nationalists posted a flyer announcing the march on their Telegram channel.

Hoosier Nationalists posted a flyer on their Telegram channel announcing what they called a “peaceful march” at 2 p.m. on March 12, which they say will also involve the distribution of flyers. “Time to take a stand,” reads the poster.

Jeffersonville Mayor Mike Moore said the city would prepare for the event, but he doesn’t think the group is well organized or large.

“We are preparing for anything, but (I) seriously doubt that this group has any organization,” he said. “We’ll be ready for anything, but just look at the past with this band, it’s just another frivolous band.”

CityBeat’s partner newspaper, LEO Weekly in Louisville (near Jeffersonville), has contacted the Active Club to confirm that it is hosting Saturday’s event. They responded with the phrase “me ne frego”, which means “I don’t care” and was a motto for Italian fascists.

The flyer for Saturday’s event also bears the logo of a group calling itself the official White Lives Matter organization.

Other “White Lives Matter” Events in Cities Across the United States have been failureswith few white supremacists showing up.

Southern Indiana has been the site of other gatherings of white supremacist groups, but none in Jeffersonville in recent years. In August 2019, the Honorable Holy Nights of the Ku Klux Klan attempted to host a “kookout” in Madison, Indiana, but were driven out by counter-protesters.

When asked if the ideologies of groups coming to Jeffersonville were undesirable in the city, Moore replied, “I couldn’t even tell you what values ​​they stand for, but this whole world needs to stop spreading hate.” I will leave it there.

Send CityBeat a news or tip or submit calendar event.